Japan Did The Unthinkable! 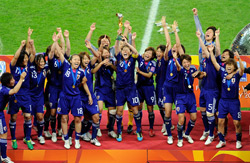 Slightly more than 3 months after the devastating and unthinkable earthquake, tsunami and nuclear disaster that destroyed many homes and families, finally, Japan found something to cheer about at international stage. On Sunday, Japan stunned two-time champions, the United States in the Women's Football World Cup in Frankfurt. Japan beat United States 3-1 on penalties.

For those who watched the game would agree with me that United States was the better team and Japan was outplayed most of the time. However, as the saying goes "ball is round, anything can happen on the field!". It was a triumph for perseverance and determination. What strikes me even more is how the coach motivates the players prior to the game.

According to the report, before the game, the players were being shown with the recent earthquake and tsunami footage to stimulate their fighting spirits and to win the game for the people of Japan. Not sure how true is this but I kind of liked the idea.

Well done Japan! Finally, it's time for some celebration....