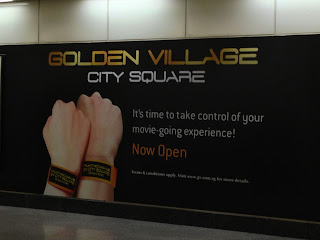 Golden Village City Square multiplex is not the biggest movie chain outlet in town but with its optimal  location (at the heart of the city, above the Farrer Park MRT Station), this 6-cinemas outlet will be the new entertainment hub for the movie fans.

I especially like of new slogan of new multiplex "It's time to take control of your movie-going experience". It seems that there will be much more participation from the movie goers is expected on how they run their show business! One other unique feature is their "Couple's Cinema"! The unique seating layout where pairs of cinema seats are separated from one another, allowing couples to cosy-up in their private space. I am pretty sure that this will be a hit for the couple movie goers, especially the young couples.

As for the The Twilight Saga - Breaking Dawn (Part 2), I must say that it is much better than I expected. The reason why I didn't catch any of the earlier installments of the franchise is that I've received quite a number of review that the movie is more for youngsters and kind of boring. But after watching the finale, I tempted to catch the earlier installments in DVD/Blu-Ray.

Short synopsis of  The Twilight Saga - Breaking Dawn (Part 2):
"After the birth of Renesmee, the Cullens gather other vampire clans in order to protect the child from a false allegation that puts the family in front of the Volturi."