Courtesy of Shaw Organisation, omy.sg and Merelion Pictures, I was invited to the Press Screening of the "Ghost On Air" 《靈聼》, A local Chinese ghost movie. I liked the pun intended Chinese movie title which could means "listening attentively" or "listening via the spirits", it's kind of spooky enough from the movie title.
Synopsis of the movie:
“Ping Xiao, a two time “Most Popular DJ” award winner, is suddenly robbed of his successful morning show slot. Jealous at seeing a younger DJ taking his place, he forces himself to conquer painful recurring memories of his deceased girlfriend and tells the ghost stories that was written by her on air. With each painful memory he endures, he regains a small step to his super stardom. However, as he is about to claim his reward, he begins to realise that the stories were not works of fiction, and maybe it wasn’t him telling the stories all along…”

The movie started very brightly with a suicide scene in a rather abnormal way (do not want to disclose too much details here to preserve the surprises) and goes on to unravel layer and layer of bizarre and unexplainable incidents surrounding the main character, Ping Xiao (Zhou Chong Qing, Dennis (周崇庆)). Overall, Dennis managed to portray a tormented soul with sad past sufficiently.
Since this is a local production with mixed casts from Singapore and Malaysia and shooting solely in Singapore, I am sure the local audience can relate well with the scene, the locale and the DJ personnel. By the way, the main actor and actress are the real radio DJ!
As shared by the director of the film (Cheng Ding An) in his surprise appearance with us at the screening, the main message of this movie is tell the audience to respect "the other side" and not to cross the boundaries. This being only his second movie (his first movie is "Kallang Roar"[2008]), there are still rooms for improvement but I must say that it is a sincere production and worth the movie tickets to support the movie.
The movie will be released on 17th May 2012, get ready to be spooked!

P/S: Being a movie buff, I like to share resources about movies (especially 3D movies) as well. Recently, I've spent a few days to compile a list of upcoming 3D movies to be released from May to July in a colourful and catchy presentation. Thus, if you are into 3D movies, feel free to download the following “2012 Upcoming 3D Movies guide”, which is hot from oven. (click on the image or hyperlink to download the FREE guide in PDF format): 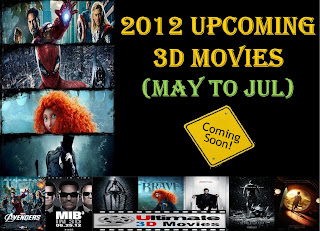 Email ThisBlogThis!Share to TwitterShare to FacebookShare to Pinterest
Labels: ghost on singapore movie